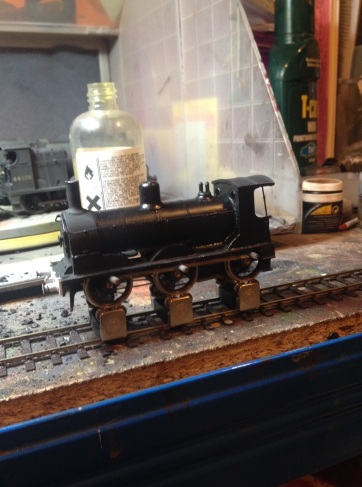 Regular readers of this blog will be aware of the extremely long-running saga of the Caley Jumbo 0-6-0 which occasionally (dis)graces these pages.

After a long and protracted campaign which started at the end of 2009, I have somehow got this thing to a point where it has a chassis with wiper pick-ups that is notionally capable of running under power now, Not withstanding this, for every single bit of forward progress this model makes, there is a violent reaction from it. Every time this happens, I sit and try to work my way to the problem which is why I’ve got to the stage where it is capable (sort of) of running on static test rollers. And so tonight, it runs with all the elegance of a bulldog with a leg missing…

With the body on, it’s still somewhat hesitant to move which I’m happy to put down to unresolved clearance issues inside the body that need located and dealt with.

Remove the body however and the situation is still poor – the chassis is reluctant to start even when unburdened by the metal superstructure and requires a heavy starting load on the controller to get it moving, just like crap 1970s/80s RTR with poor quality Ringpiece (sic) motors in over-scale tenders. I guess that if I leave it aside for a bit I can return refreshed to the model and identify a solution.

This brings me to the point of this entry; this kit retains only the superstructure of the loco. The reason for this being that I have had to source suitable frames and rods for both loco and tender along with various smaller fitting. While the construction of the running gear for this loco has been an unashamed comedy of errors, it has taught me several useful things about the finer points of loco construction so while the struggles continue, they provide an education in the practicalities of ‘rolling your own’  and how NOT to produce a kit.

The point is that I SHOULDN’T HAVE TO go through the hand-to-hand fighting I’ve experienced with the Jumbo, just to build a commercially available kit (the only one in fact of this prototype). It has turned into a ‘Grudge Build’, I have invested (and probably wasted in honesty) hours and pounds trying to turn this effort into a decent working model. All pleasure has now gone from the process and the only reason I haven’t just jacked it and lobbed the f****** thing into landfill is that I refuse to be beaten; it’s just a bloody war of attrition now and I’m not prepared to throw the towel in out of pride, nothing else.

The kit itself dates from the mid-late 1970s and consists of loosely accurate body and tender castings. The tender itself is education in its own right – it consists of five major components with the tender side and underframe as one part with ‘pin-point’ axle bearing locators. The builder is expected to solder or glue the entire assembly, the opposite sides of which match only arbitrarily, whilst at the same time ensuring that the three wheel sets are mounted square and in alignment…

The chassis frames were obviously cut from redundant GWR nameplates, such is their thickness and with spacers and bearings attached it isn’t possible to fit 00 axles!

Additionally, the rods are of a different material and show all the consistency with the frames (with which they should match) of items sub-contracted to a factory on a small planet orbiting Wolf-359…

Clearly there was some interesting stuff being smoked in the draughting room that day.

In both cases, I ended up supplying my own chassis parts and rods, thereby increasing the expense considerably and generating trials of their own.

In the 21st Century, there are some marvellous manufacturers out there producing excellent, well-designed kits with clear and unambiguous instructions produced by someone who as actually BUILT the kits and applied some kind of logic to the process.

DJH have a number of these poorly designed and inferior efforts still on the market in 4mm and whilst their 7mm products are, with justification highly regarded, their smaller brethren, sadly fall massively short of acceptable standards. I have in the last four years, built loco kits by NB models, Alexander Models, NBR 4mm Developments, 52F and Finecast. The only two kits I have experienced appalling difficulties with were this and another from the same stable. These ‘Consett Clunkers’ have been around for nigh on forty years and I believe the time has come for them to be packed off to model Valhalla.

For someone who greatly admires the Caledonian Jumbos and would build more were a good kit available, it’s a bit disappointing but I will NEVER purchase one of these antiquated, un-buildable pieces of crap ever again. To describe it as a kit in the modern age is a borderline breach of trade descriptions and if you really MUST have a Jumbo in future, trust me, you really would be better off scratch building.

Please, for the love of God, somebody produce a decent etched kit of this and the 439. It’ll save at least some folk in the world from heartache and find this abortion a bright new future as boiler and tender ballast!

14 thoughts on “Probably the Worst Kit in the World…”