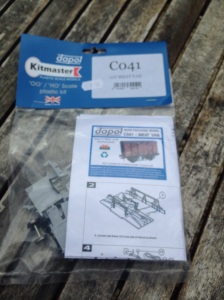 Back in 1980 as a 16-year old who had just left School, I went on holiday for the penultimate time with my parents. The destination, as had become habitual, was Berwick; long a favourite of ours and a place I still adore. I’m convalescing from surgery at the moment but once I’m match fit I’ll be making another visit!
Back to 1980 though and I remember a couple of other things; I’d taken a couple of the then recently re-released Airfix rolling stock kits with me to amuse myself on those days when the haar rolled in, one of which was the 12t meat van; now known to me with the addition of some anorak-ness as the diagram 1/250 type. Another thing I remember from that holiday was taking a little radio with an earpiece with me and listening to John Peel whilst the folks were watching the telly!

I’d also managed to acquire a tape recording of Orchestral Maneovres in the Dark’s eponymous first album and it subsequently served as a kind of soundtrack to those two weeks for the daytime at least; at night my ears were treated to the sound of various Napier, English Electric and Sulzer powerplants dragging various combinations of rolling stock along the ECML, only a couple of hundred yards from the caravan which directly overlooked the action. This was also the first year I truly became aware of the railway systems of the Scottish Borders and Northumberland as I made a couple of friends during the holiday, resulting in a visit to the old station at Norham. Here I discovered the fascinating short trains that connected the main line at Tweedmouth and Berwick with the Waverley Route at St Boswells via Kelso. In their last years these trains were hauled by BR Standard Class 2 2-6-0 machines. This was little more than 15 years before my visit though that seemed a long time back then! Today, with the advent of the new Judith Edge etches it’s finally possible for me to create this class of locomotive using Bachmann’s Ivatt 2MT as the starting platform.
That then what I intend to do and I’ll cover the project in following posts.

Meantime however, back to the Meat Van.
One of the reasons I retained a soft spot for these vehicles is the fact that they were initially turned out in passenger stock crimson livery as opposed to the standard red oxide you’d expect a goods vehicle to be turned out in circa 1952. This implies the ability for the vans to be attached to passenger trains. I therefore thought one of these vans would be useful as tail traffic on a local passenger train for Culreoch and any project of my own that subsequently materialises. 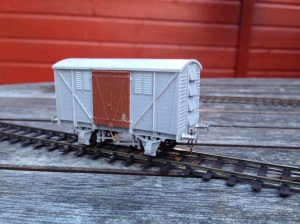 I have made some modifications to the kit, most notably by adding Parkside doors to the body and replacing the V hangers for the brake gear. I should really have done the same for the 4-shoe brake gear but the fact is that it doesn’t interfere with the running of the wheelsets, even to EM as here and will largely hide in the shadows so I’m accepting a bit of compromise here. Additionally I’ve fitted Lanarkshire Model Supplies buffers and drawhooks with instanter couplings fitted. I’ll attach the brake levers and vac cylinder today before the van heads to the paint shop.
Kinda brought back memories of a happy moment in my history when I was working on this van. There could only have been one soundtrack to activities in the kennel yesterday afternoon…

6 thoughts on “The Nostalgia Builds.”