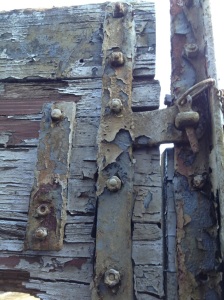 A trip was made to Whitrope today to take measurements of the timbers with a view to having replacement planking cut.
One surprising observation was that the horizontal planking varied in depth considerably but within certain limits. On the end for example two planks were 220mm in depth whilst another two were 170mm and a single plank measure 180mm. Variations on this them were repeated on each face of the wagons though it has to be said that it still ended up the same total height on every face so the variations ultimately balanced out.
The coach bolts used in this vehicle are pretty badly rusted and it looks like we’ll be grinding these off and replacin
What appeared utterly random though was the floor planking which although of consistent depth had no two planks exactly the same width.
It rather proves an engineer friend’s theory that joiners have somewhat looser measurement standards than those who work with metal!