You can make me whole again… 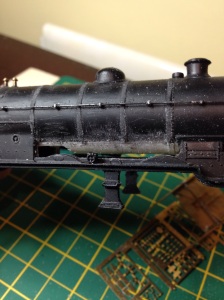 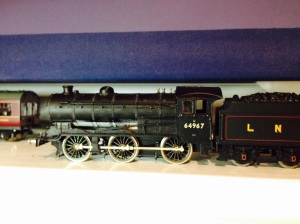 Well, as you can see, the Jenny Frost-style makeover of the J39 continues with the smoothing down of the plasticard infill of the lower boiler. Some thinning of the moulded boiler bands has taken place to match the new microstrip bands on the new section. Replacement cast buffers have also been fixed to the beam and we’re heading rapidly towards the paint shop phase.

While all this has been going on, Hornby’s first all new 2015 release has sneaked in under the radar in the shape of the 21 ton hopper wagon. 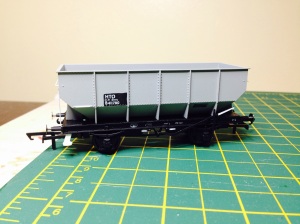 Now, I’ve not run this model under a ruler or critically checked the measurements against a drawing but it has the correct look of this type of wagon and so far nothing visually jarring is evident.
The mouldings are crisp and good looking with the rivets and long brake levers, signature features of the LNER Diagram 100 vehicles represented by the model having been executed with post-‘Design Clever’ finesse.
EM modellers will be pleased to learn that this is a nice, easy conversion. All that is required to accommodate a Gibson EM wheelset is to gently file away some material from the back of the ‘tie bar’ linking the two brake shoes on each assembly as shown below.
That done, the wheelsets will just push into place without difficulty.
The only thing you need to look out for when filing is that on some wagons, the brake shoe assembly isn’t glued as securely as it might have been, so be gentle when filing. 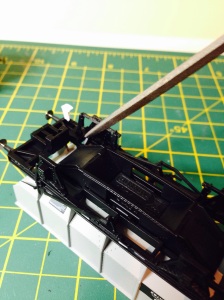 Hornby appear to have learned from their thankfully short lived evolutionary dead end of 2013 and are back out producing respectable models.
“And what’s more”,as a silly auld fart called George once said; “they’re doing it deliberately.” 😉

3 responses to “You can make me whole again…”