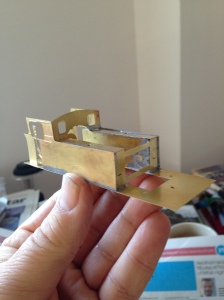 Sorry, but I couldn’t resist cashing in on the British Establishment’s ongoing obsession with expired livestock with a cheap headline of my own!

It’s really just a crude way of drawing your attention to a new project I’ve started. 🙂
Last year I purchased the High Level Models kit for the Barclay 0-6-0 side tank loco and though I still have the 72 and 300 class locos to finish, I really wanted to get stuck into an etched kit as a change from the old cast clunkers and to have a short break after completing a couple of things for others.
Three nights work has got us to the stage seen in the images below.

I have to say that so far, this kit has been a delight to build, being both well designed and well produced.
The locomotive superstructure is made of etched brass with smaller fittings of cast brass and white metal/pewter for the heavier castings. The tanks/sides and boiler have been designed to bolt together in order to hold them in correct alignment to solder. Slots and tabs are well executed and assist in making all sub assemblies nice and square. Care is still required though but if you take your time and prepare each stage, this kit won’t cause you any real angst. So far, despite only one previous and as yet incomplete etched loco under my belt, I am enjoying every second spent building this kit. In fact I have to make myself stop rather than keep going all night with it! 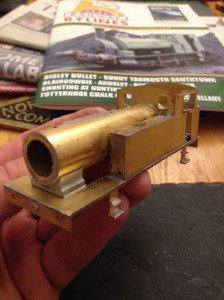 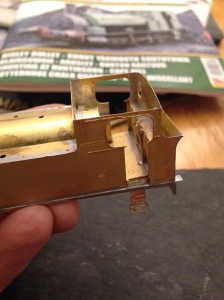 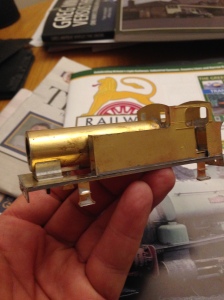 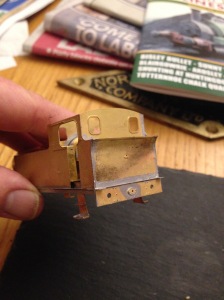 Why ‘puggies’?
Well, in the days when Scotland was heavily industrialised, the term was widely used when referring to the squat, powerful shunting engines that were employed in the mines, ironworks and docks. ‘Puggy’ is also the word for ‘toad’ in the Scots language, akin to ‘Puddock’ in old English.
EDIT: Having consulted a very reliable source I have to offer a correction to the above; ‘Puddock’ is in fact the Scots word for toad and is not Anglo-Saxon as I mistakenly believed. Further to this, it appears that the earliest recorded use of ‘Puggy’ in fact refers to a small monkey although no evidence has been offered of any Caley 498 dock tanks ever having been fuelled by bananas.
My thanks to Paul (Wee Ginger Dug) Kavanagh for the above information.

11 thoughts on “Puggies, not piggies!”