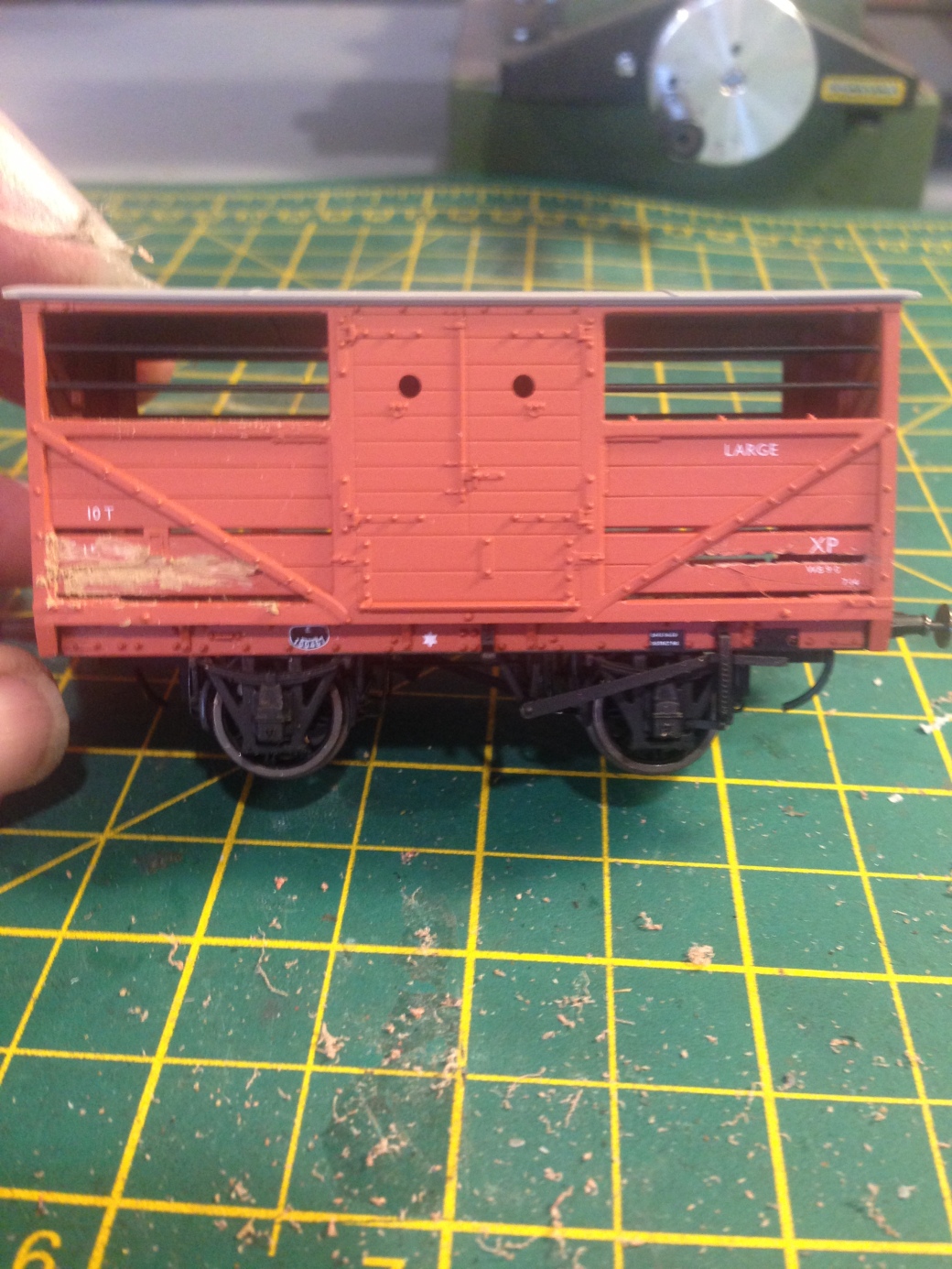 It’s a good weekend here at the end of my two weeks’ holiday with plenty of work going on in the workshop.

It may be the fact I tidied it or it might be the fact that my creative instincts have kicked in a bit more of late but there’s definitely an upswing in work going on there.

Saturday was primarily spent on some jobs For a friend and a couple of models that are going to be offered on a certain well known auction site.

Today has mostly been messing about with a couple of wagons, purely for my own entertainment.

Despite the controversy surrounding the model, I acquired on of the Oxford LNER pattern cattle vans yesterday with the intention of tackling some of the major flaws of the model.

Today, I concentrated on the bodywork which those with more specialist knowledge have identified as wrong. Reports advise that the two sides should be a mirror image, rather than opposite handed as Oxford have done. A half hour or so with some plastic strip, filler, the Proxxon and some wet and dry have made the model more superficially accurate and at some stage, I’ll correct the underframes to the 10′ wheelbase it should be using Bill Bedford units whilst also equipping it with a cast vacuum cylinder.

Later on, I made some progress on another wagon that’s appeared on the bench. This happens to be a Parkside BR 24.5 ton mineral; a type that will be very useful in the BR/NCB 1970s project I’m slowly developing in concept.

I decided to fit this with Bill Bedford sprung suspension. Normally any adaptations should best be done before assembly but as I’d already assembled the body last week, I had to try something different to remove the raised areas under the wagon floor. 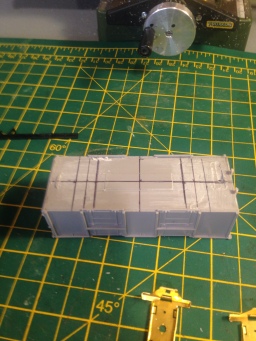 Again, I called the Proxxon into service but set it up as a vertical mill this time, using a mill bit to machine the raised mouldings down to the level of the floor

Even if it wasn’t strictly necessary it was quicker and more precise than doing it by hand and it was a useful skills exercise.

The BB units were assembled and aligned on the floor .  The wagon is now a basic rolling vehicle but now the solebars need applied. I also need to acquire springs/roller bearing  casrings

I’ll try some of Justin Newitt’s chassis on further builds – it’ll certainly eliminate the chores involved in getting this one to the running stage.

One last item attended to today is this kit built Glasgow Standard Tramcar which is here for painting and finishing. Today, she has received her primer. A day ar two’s curing will see her ready for the first paint

It’s nice to be getting back into some proper modelling again!

One thought on “Lazy Sunday Afternoon…”