Many of you who know me personally will know that I lost my best friend, Abi on May 20th this year following a short illness at the grand age of 14 years and almost six months. Anyone who has ever had the honour and privilege of a dog in their life will know just how this feels and there have been tears enough in recent weeks. Eventually, acceptance comes and life must ultimately continue.

I felt however that her long and overwhelmingly happy life deserved some commemoration and I thought this would best take the form of a post featuring some of her best photographs, accompanied by some little anecdotes where appropriate.

Abi was surely one of the most photographed dogs in the world if the number of images I appear to have is anything to go by, there was rarely an adventure we shared over those years that didn’t have a couple of snapshots!

It wasn’t all adventure of course and she was certainly a fan of her bed! 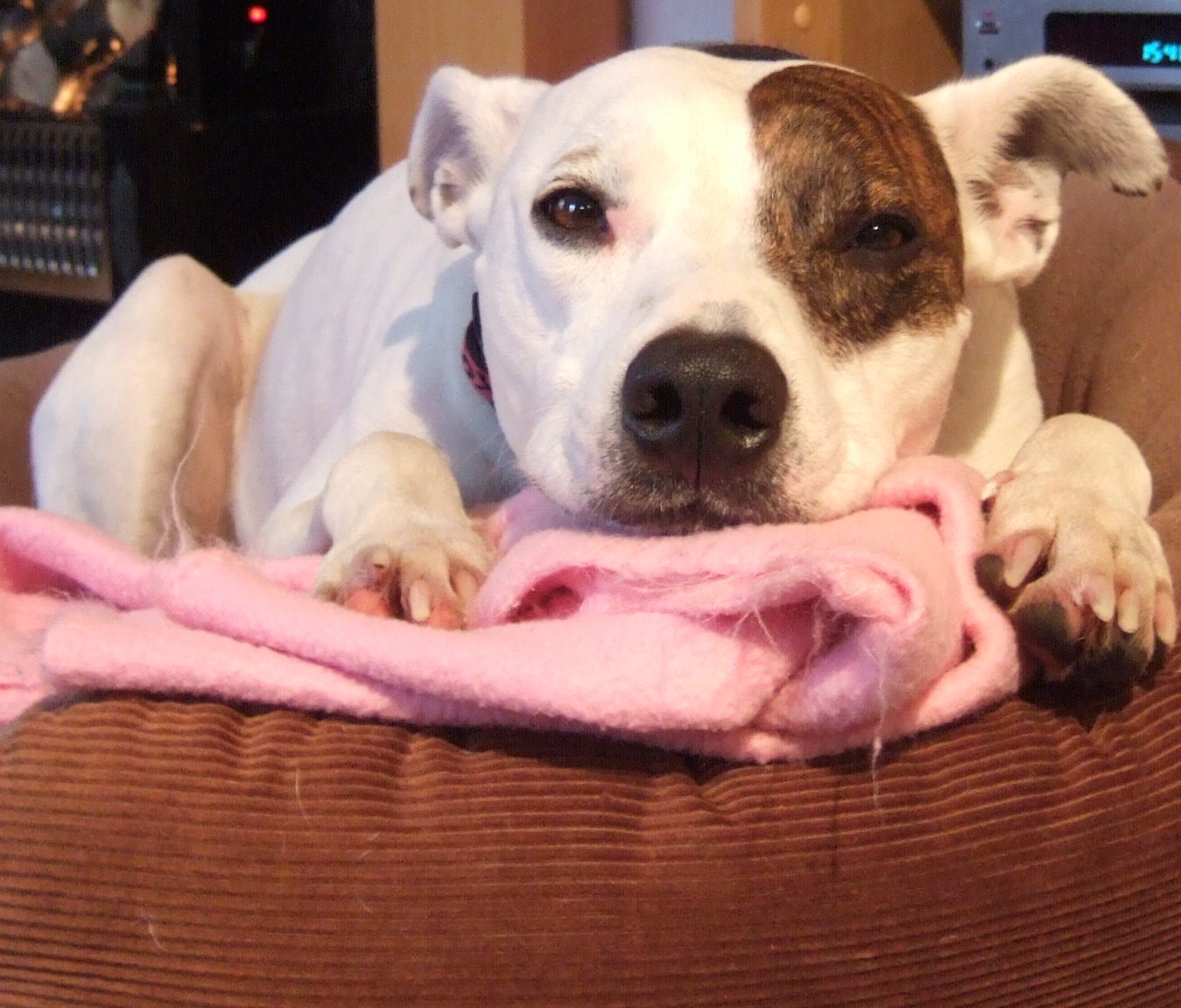 She loved a good bone in her younger days too!

Although most people recognised Abi as a Staffie (from her paternal side), her mother was a Lurcher and she had definite Greyhound/Whippet physical characteristics which I think you can readily see here. She certainly had a bit of the chaser about her when she saw a small animal, although she was very fond of cats, being in the company of two for a while.

Abi loved our trips up to Whitrope and our walks along the old Waverley line and I’ve lost count of the times we made the trip down through Ninestanerig Cutting down to Riccarton Junction. 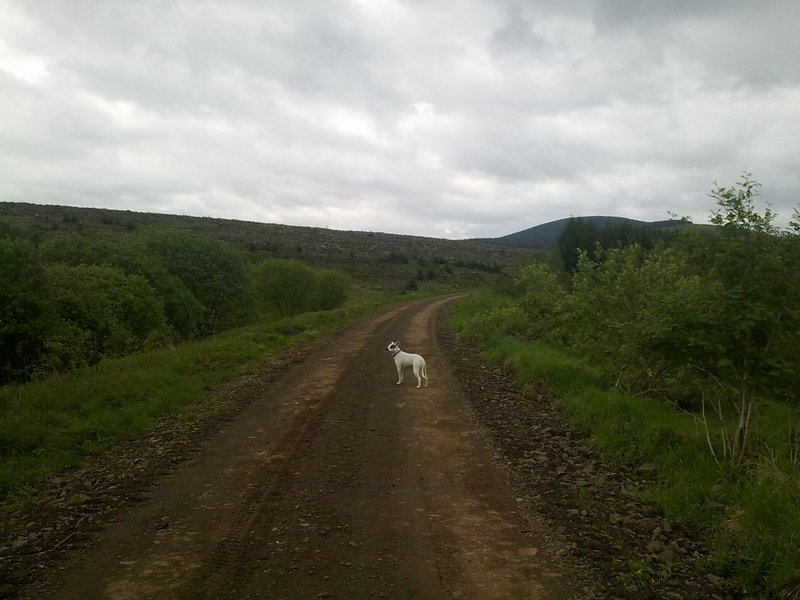 The Waverley of course became a big part of Abi’s life and for a while, she became a proper “railway dog”.

Not only was Abi fully trained in Permanent way inspection… 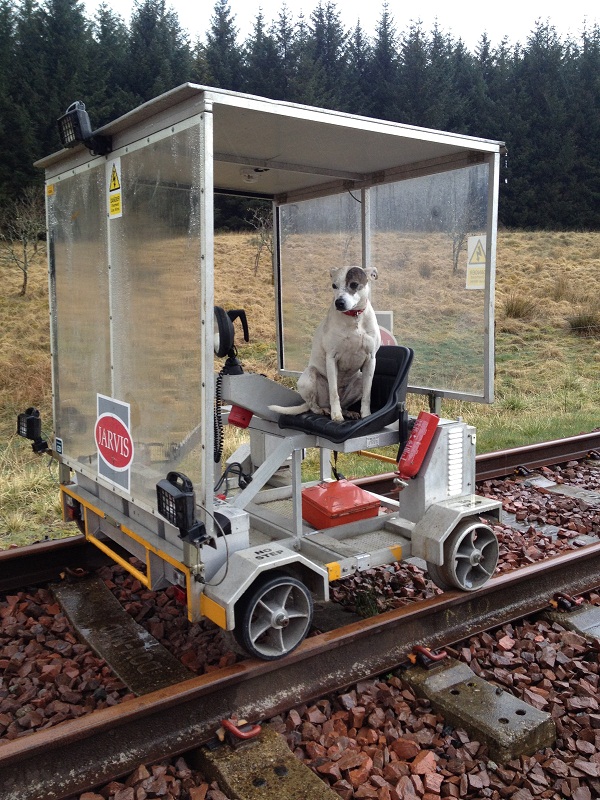 She was also as far as we can gather, the world’s first Lookout Dog, trained to bark upon sensing an approaching train.

(DISCLAIMER – SOME OF THE ABOVE MIGHT NOT BE STRICTLY TRUE…) 😉

Of course, it wasn’t all work and she was known to let her hair down a bit at parties!

Right up to the last year of her life, Abi enjoyed pretty much perfect health although she had an occasional incident, one of which required her getting stitches following a bite from another dog who wasn’t on her Christmas card list. This is her feeling sorry for herself for the humiliation of having to wear the cone of shame!

Not only was Abi a regular at Whitrope, she was no stranger to train travel and has had an A1 and Royal Scot for haulage as well as 37/4s on the Cumbrian Coast. Her favourite though was steam heated Mk1 stock, hauled by a boiler fitted 37 025 at Bo’ness…

She really was the most photogenic of dogs and there are so many more I could share. However, one image, I think really encapsulated the force of nature that this wonderful creature and companion was; I took it on holiday in Glencoe with her in November 2007 as we were walking up the glen behind Ballachullish. It was a nice, bright morning with pockets of low cloud on the mountain flanks. Abi had gone on ahead of me, sniffing and exploring as was her wont all her life when she reached the crest of a ridge and something caught her attention – I got the phone up quickly and just snapped and when I saw the result, I knew it was the definitive photograph of her. If she had an autobiography, it would have to be the cover shot and ever since I have called this image her ‘Monarch of the Glen’ moment… 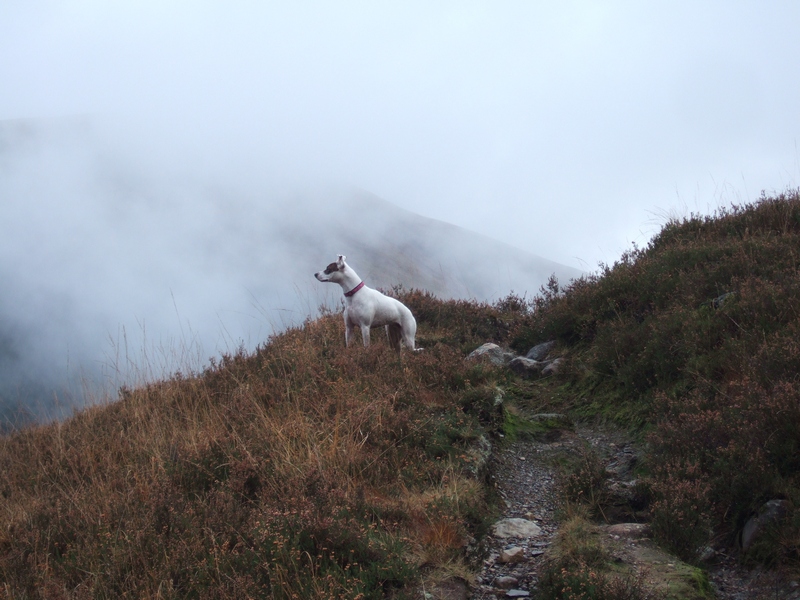 I hope this wee celebration of her life in pictures has given you a flavour of what she was about if you weren’t lucky enough to know her personally.

Would I do it all again if I could? You bet I would – thanks Abi, it was the highest honour to be your friend and keeper!