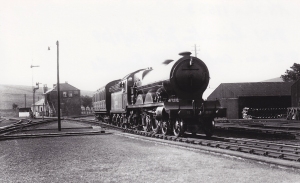 Whilst a number of kits exist for models of the Caledonian and Highland Railways’ larger locomotives, there is nothing similar for the NBR (sorry, I just don’t like the full title!) 🙂 equivalent, WP Reid’s impressive Atlantic Class locomotives.
Built in the early 1900s to handle crack East Coast services north of Edinburgh and also the Midland Expresses north of Carlisle over the Waverley Route, these big 4-4-2s were unique to the best of my knowledge as being the only tender locomotives in Scotland with that wheel arrangement.

During the 1970s, a cast kit was available from GEM, but this is now very difficult to find so Peter Stanger, founder of 52F Models has intimated that if sufficient interest is forthcoming he will produce an etched kit in 2015.

It’s certainly a kit I would love to see produced so if you like me share that desire, please leave a comment to that effect and I’ll make sure word gets back to Pete.

Having made his mark on the NER modelling world with a rather nice series of kits, Pete has begun to tackle gaps in the NB’s fleet such as the C16 I reviewed last year and the useful N15 tank loco. Currently he is working on a J83 tank, famous in the later steam era as the Waverley station shunt pilots and whilst nothing is as yet finalised, future projects under consideration include J88 dock tanks and ‘Intermediate’ 4-4-0s.

You can visit Pete’s website and see the NE and NB items he has already produced by following this link. http://52fmodels.sharepoint.com/