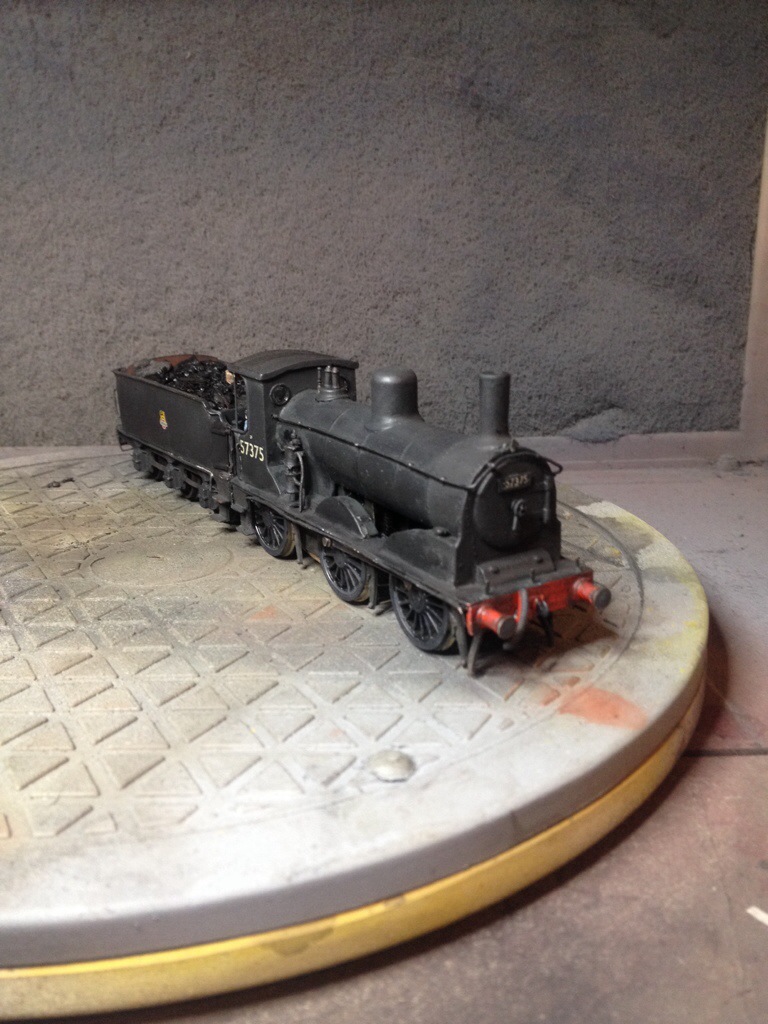 I am pleased to report the final completion of Jumbo 57375 as she is now known.

All the major work is now complete. Coupling links and loco-tender coupling await but she is otherwise complete at last.
It’s been a long, hard road but here we are at the end. Perseverance has borne the sweet fruit of victory.
Who would have thought such a basic model would have thrown such obstacles and offered so much resistance?
It has certainly been a model that has taught me a great deal that can be put to good use in future projects.
As in other aspects of my life, finishing the project now as we reach the end of the year draws the line under a phase that has lasted four or five years where things have occasionally lacked direction and proceeded in a stop-start manner. That can be extrapolated beyond the workbench to a major degree also but the Jumbo has brought that cycle to a close in a satisfactory manner.
I’m rather pleased with her appearance and in 2015 you will have the opportunity to see her in operation on Culreoch, bullying various wagons around!
Right now though, I’m just going to sit back and enjoy looking at my first EM gauge locomotive. Although back in the day, this model was started in OO for the notion I had of an east Central Belt project by the name of Inchkennet, here she is ready for a career in ‘south west Scotland’.
I know somebody who can’t wait to see her there!

Seeing as we are still struggling manfully on with the Jumbo, I thought I’d show you some of the wagons it will ultimately haul.
Apart from the open, the construction of which we followed a few months back, all these kit-based wagons were built a few years back and have just been converted for EM operation. I’m still rather proud of the finish though.
The only exception to this is the brake which is Hornby’s 2011 release.
For what it’s worth, this to me is the best representation of the BR standard brake yet produced and whilst the Bachmann brake is still great, there’s a real subtlety about this one that gives it the edge. I’ve fitted mine with LMS Models Dowty buffers and given it a lived in look. It really looks the part. If Hornby were to produce it with oil axle boxes I’d seriously consider making it the standard (I know !) brake in my fleet of stock. 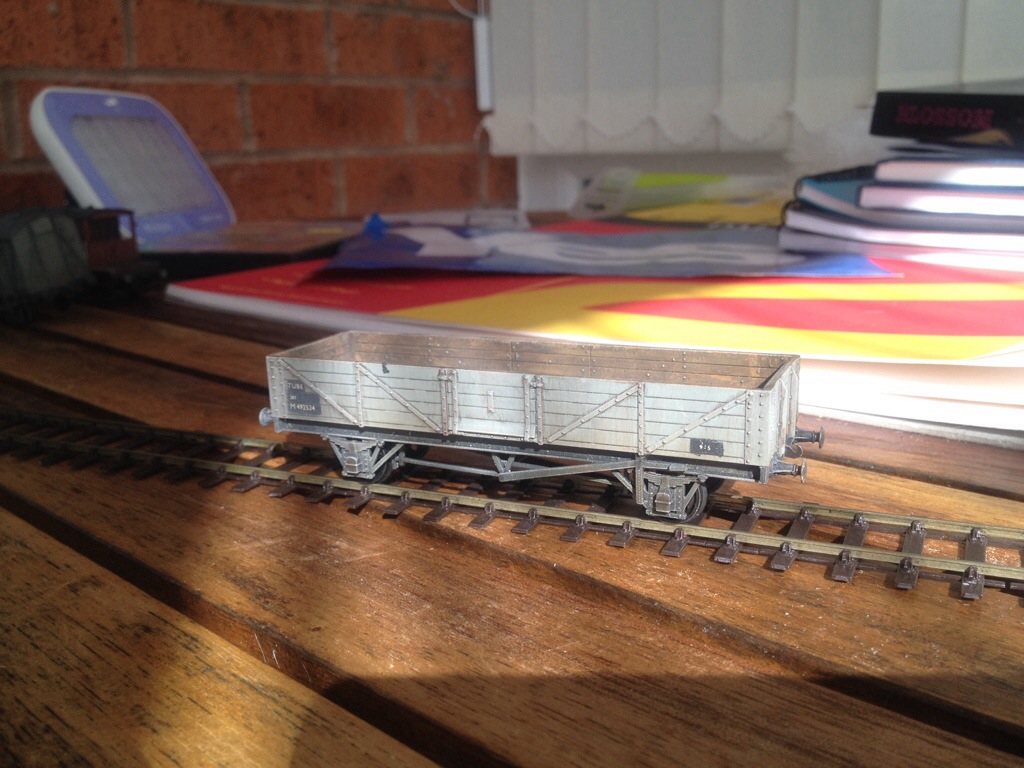 As will already be obvious, I’m involved in converting to EM, a fairly substantial fleet of rolling stock.
Here you can see two proprietary RTRS wagons from Bachmann, both of which were rather painlessly converted to EM, chiefly through removing a couple of strengthening ribs behind the axle guards. The first one is a very standard BR Diag. 1/108. This one is intended for use in my 1956 modelling period when these vehicles were essentially new so I have been very sparing on the weathering here.

The second vehicle is again from Bachmann and portray’s the 1/108s
predecessor in terms of general use, the ubiquitous RCH wooden-bodied mineral, operated pre-war by countless private owners. This private fleet was put into national pool service in the Second World War and that’s pretty much how it stayed afterwards with the wagons becoming part of the general pool of British Railways wagons, with the erstwhile owners being compensated by the government.
This model portrays one such wagon as it would likely have looked in the mid-1950s. Still wearing remnants of its original livery but with over a decade and a half’s hard service in harsh, austere conditions, running repairs being as much TLC as could be spared.
The vehicles were in a pretty shocking state by 1958 when BR finally grew sufficiently ashamed of their condition to sanction repainting into unfitted grey for the survivors. Five years later most were gone anyway replaced by steel vehicles.
This model, using an already part-weathered Bachmann wagon from a special set of three, represents the typical appearance of a pre-’58 vehicle!

I’ve also been busy with a couple of kits; the Cambrian LMS Diag. 1986 single plank wagon and a Parkside LNER Diagram 109 Lowfit.
The Lowfit is intended for my mid-1960s era of operation, thus explaining the load, a 1964 MF 135 tractor.
This is one of a group of five which will run together in a class 4 or 6 service between Kingmoor and Millerhill.
The tractor itself still needs some detail refinements and the addition of ‘restraints’ to keep it secure on the wagon.
The 1986 is intended for the earlier scenario but it has to be said, they all look rather good standing together on the ‘photo’ track! 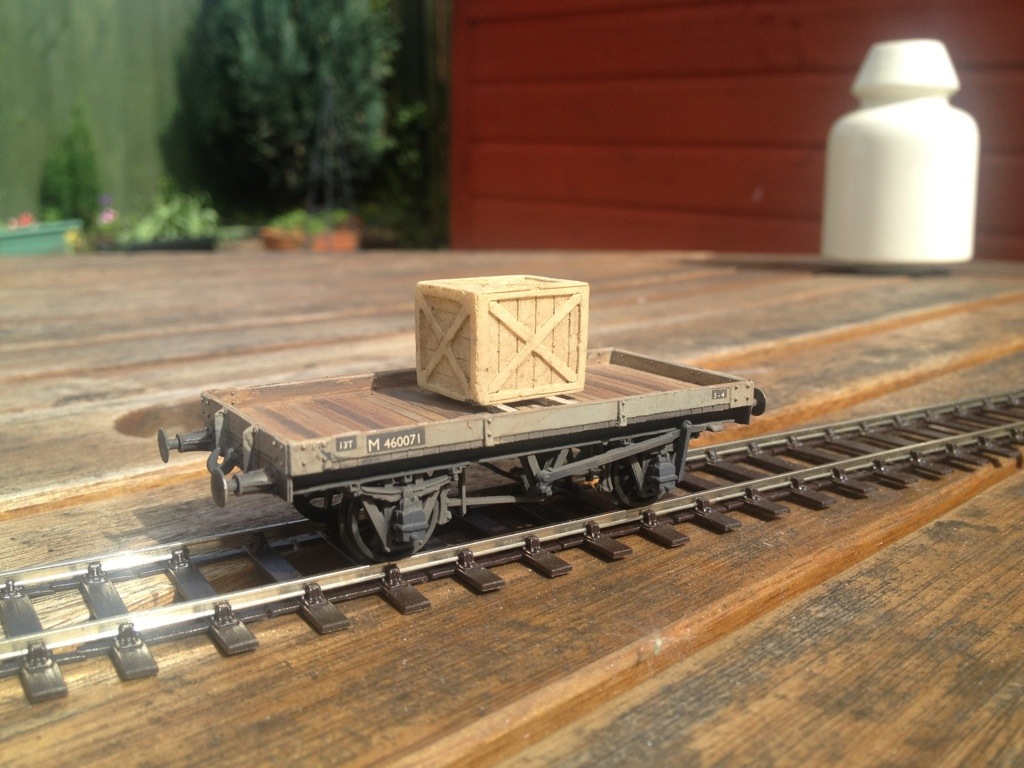 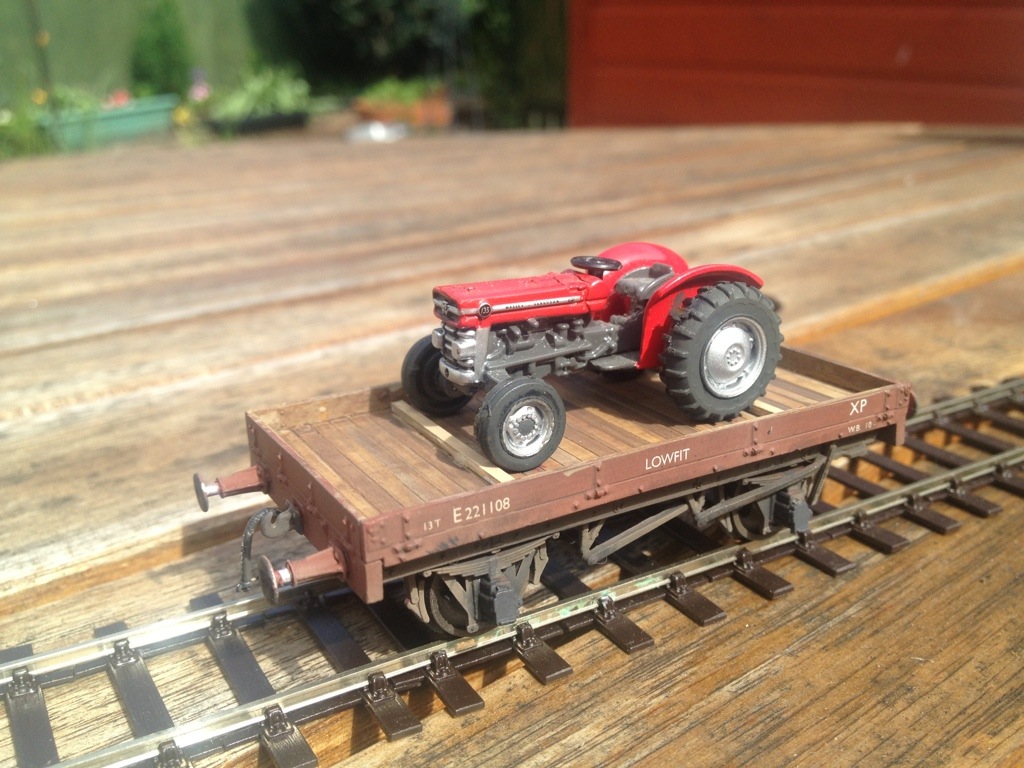 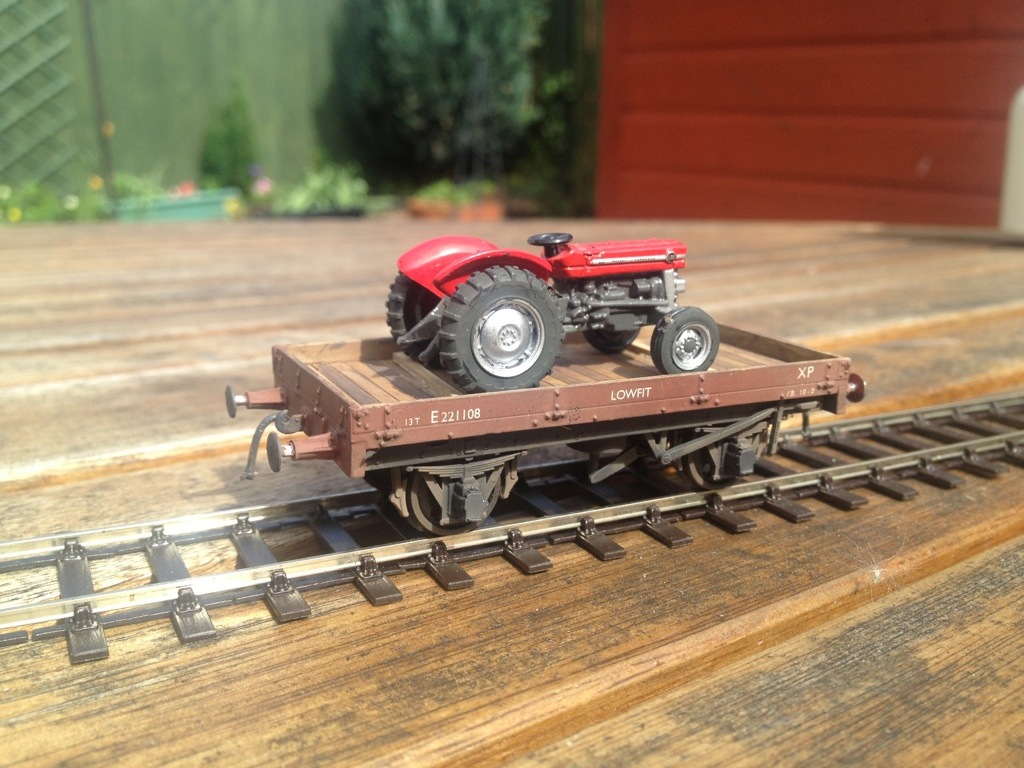 A consignment of tender wheels arrived today although I was slightly crestfallen to see that my supplier had provided OO wheels on pinpoints which were ultimately as much use as Nigel Farage to an Edinburgh taxi driver.
After weighing up my options, I trawled my parts boxes and found a set of 14mm spoked Markits tender wheels and saw that they would sit comfortably on the Gibson EM axles I had spare.
Feeling pleased that I’d pulled off the bodge successfully, I placed the wheelsets into the tender frames and have placed them temporarily under the body. There is still a bit of filing and clearance to be done underneath so the wheels turn freely and in truth I wish I’d fabricated new outer frames but things are pretty much on course now here to create a very nice little engine. I’m looking forward to adding the smaller parts and getting on with the painting.

More work carried out on the tender to allow a satisfactory mating between the chassis and the main body. This involved removing a lot of material fore and aft to accommodate the frame ends.
The forward end is now attached by an 8BA screw and the rear is retained by a plastic lug which is attached to the reconstructed buffer beam.
I suspect more material will need to be removed from the side frames though as the axle ends are still a bit neat on them. Not a great deal to be done now until the wheels arrive. After that, brake gear and detail fittings. 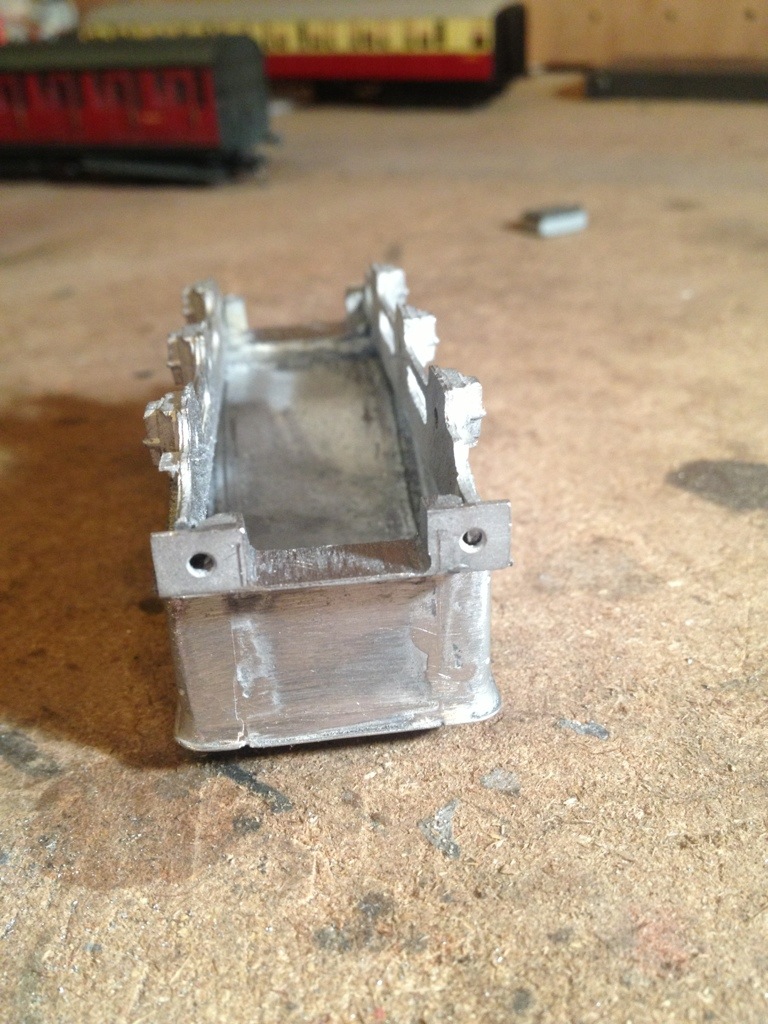 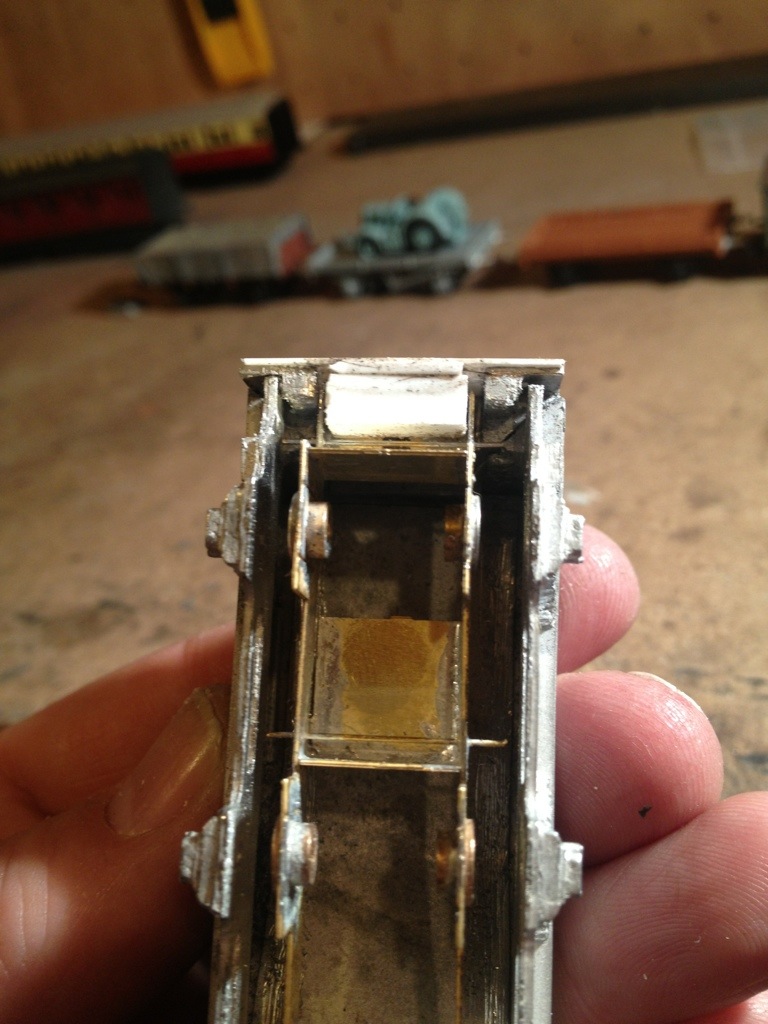 I decided to crack on with the tender underframe for the Jumbo tonight following the arrival of frames from Caley Coaches. The Caley very thoughtfully settled on a standard tender chassis wheelbase during the Drummond/McIntosh/Lambie era and that means I was able to put something underneath the DJH castings. You can see the supplied arrangement in the top picture. How anyone ever produced a running model from this garbage is a matter of amazement. How the hell you solder an entire tender body together whilst installing bearings, wheelsets and ensuring overall squareness of both body and axles is utterly beyond me. To think I used to get so frustrated and blame myself for failing in these tasks!
I would say most successful builds of early DJH were in spite of rather than due to the design!
Anyway, that’s enough grumpiness on my part, let’s get on with our tale.
You can see that I attached a spacer to one end of each of the frames. This is a precaution to prevent any distortion through heat during assembly that might occur if I attached both spacers to one side. This creates a risk of your chassis looking like it should have a Fyffes sticker on it!
Assembly was fairly straight forward, the openings for the axle bearings having been gently opened out prior to assembling the frames. Once this was achieved, I attached the bearings using axles to check squareness. Lastly this evening I attached the transverse rods for mounting the brake gear.
There we have to bring the job to a close for now as I need to order correct 4′ diameter wheels for the loco and also some Carrs Brown Label flux for the stainless steel coupling rods on the loco.
One thing’s sure, I’m going to have to cut the frame ends short and carry out some substantial surgery to the lower body ends on the tender in order to mount these frames at the correct height! Once that’s done to satisfaction I will add a false floor for the purposes of mounting the chassis to the body.
Not Mission Impossible by any means but care will certainly be required! 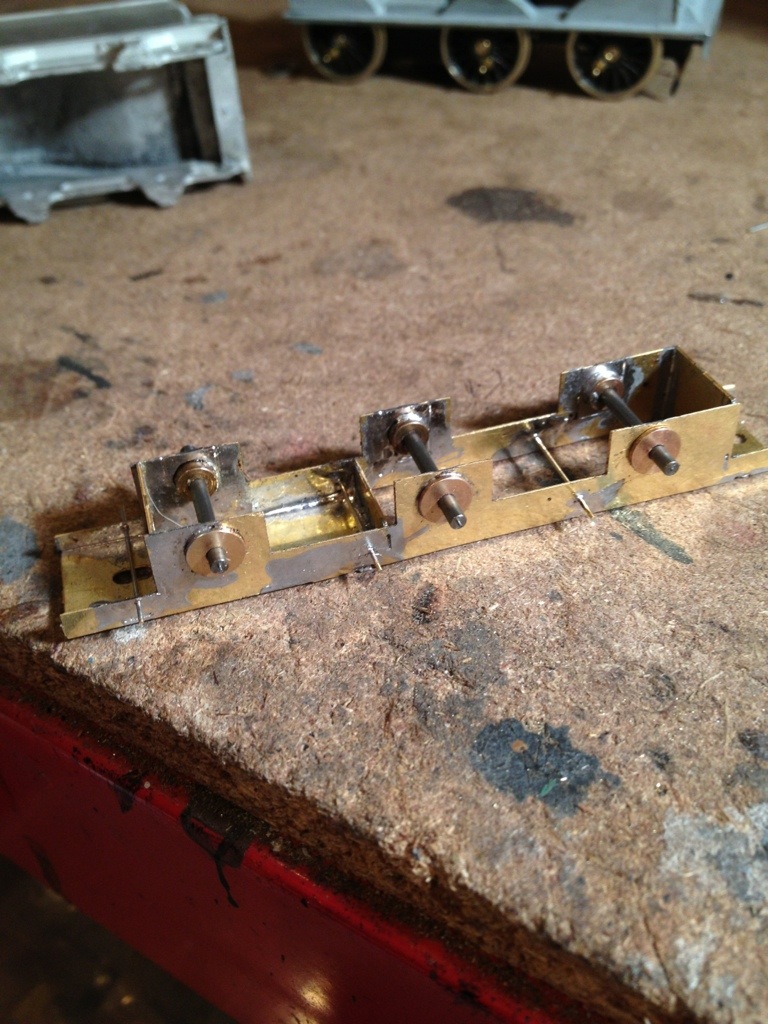 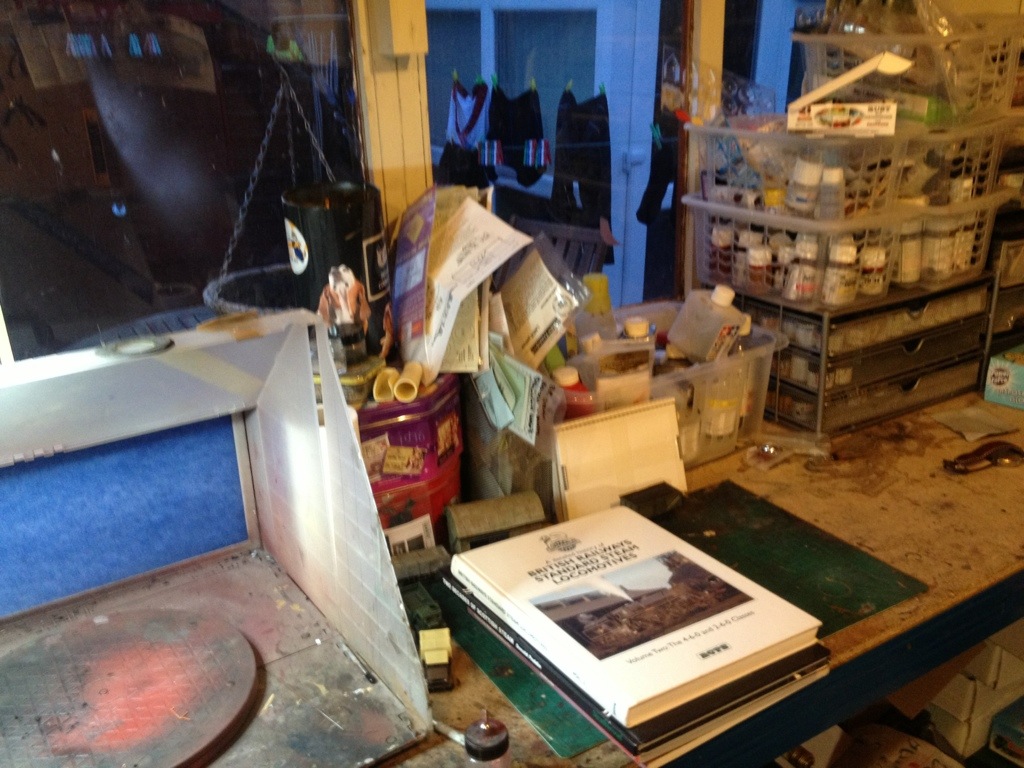 Last night I decided enough was enough and mercilessly attacked my workshop, clearing the industrial level of clutter and reorganising the tool drawers in order that I can crack on and produce some proper EM kit.
OK, I’ll admit the painting section needs a bit more work but come on, you never saw this place on Sunday!

In any case, along with the previously blogged van and a couple of RTR conversions, what you see here is hopefully the nucleus of my first whole EM gauge train.
I first visited the loco about three years ago during my first ‘Inchkennet’ ScR layout plan phase, but gave up trying to make something useful from the utterly horrible DJH chassis. Last year I dug it out and converted the chassis to EM with the intention of providing Culreoch with a bit of motive power variety. That burst of activity stalled due to issues with the tender but now, a year later this Caledonian 279 or Jumbo has found itself thrust into the spotlight again. Now equipped with Gibson frames, Markits Finescale wheels and a Mashima – High Level power train, the Jumbo awaits an etching for the tender chassis and will hopefully be ready for action before long.
Also seen here are a Cambrian Diagram 1986 single plank wagon and a Parkside LNER Lowfit. Both await completion, possibly tomorrow!
Lastly, that unpromising heap of bits is hopefully going to morph into a very nice take on the LMS standard 20 ton brake van. It’s a bog standard Airfix model but by the time I’ve refined it, fitting the LMS Models buffers and ballast box, some handrails and the excellent Shawplan laserglaze, this should be a rather nice little model to bring up the rear of the train.
This should be the perfect opportunity to practice modelling discipline and get a coordinated effort of related items that compliment each other.
Breaking the habit of a lifetime I suspect!